The other day was on a short roadtrip, about 45 minutes, so I decided to listen to a Contemporary Christian Music station. During that time they played quite a few songs with few interruptions, which was good. But without exception, every single song was a high tenor male voice, singing at the top of his range, accompanying by the same 4/4 bass beat and virtually the same drum pattern. All songs were approximately the same tempo.

In 45 minutes I didn’t hear a single female voice, a male bass or baritone, or any instrumental solos. I don’t think that creativity is gone from Christian music, but radio stations certainly show no creativity in their song selection. Secular pop stations are little different.

I presume the argument is that this is what people want to hear, but radio stations are all hurting because people are going elsewhere for music. I have a hard time feeling sorry for these radio stations, Christian or secular.
Posted by Jim Mathis at 1:13 PM No comments: 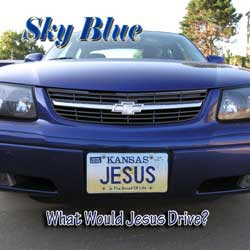 The Sky Blue CD, “What Would Jesus Drive?” is done. We will have a CD Release Party and Concert this Saturday, October 17, 2009, at Homer’s Coffee House, 80th & Metcalf in Overland Park, Kansas.
We spent every other Saturday this summer in the studio, writing and recording. We had no budget, no time limits, and no bosses telling us what to do. It was a true labor of love.
I have always been a little uncomfortable with musicians calling themselves “artists” as is the norm in some circles. But with this CD I am beginning to feel that it might be a legitimate title. For one thing the songs are all original, well 8 out of the 10 are, and the other two are greatly altered. So we really did create something from nothing, which to me qualifies as art. The songs were all collaborations between Bob, Theresa, and me with Wes adding his part later.
Working with others, who are true artists, to create something that is new and original, that we think others will enjoy, was a true joy itself. As independent artists, we see the CD as a calling card. This is who we are, at least at this moment in time.
Occasionally in the music business somebody will sell an amazing numbers of records – perhaps millions. This is highly unusual and should not be considered a realistic goal except for a very few groups with huge marketing budgets.
For most of us, making a record that we are proud of, that we can point to and say, this is where we are musically and we want other people to hear it, is a legitimate goal.
This is not an ego thing. It is not reclaiming lost youth or trying to be something we aren’t. It is a group of artists working as a team to create something we like, that expresses a little bit of what we have to say.
Posted by Jim Mathis at 1:42 PM No comments: