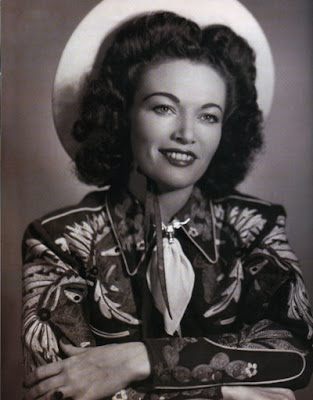 How many of you have heard of Beryl Harrell?

There is a great story about her in the fall issue of The Fretboard Journal.

She was born in 1918 in Washington but grew up in Los Angeles. She took steel guitar lessons from steel guitar legend and pioneer Sol Ho’opi'i. By all accounts she was gorgeous and a phenomenal steel guitar player. She played in several all-girl Hawaiian bands in the 1930’s and ‘40’s.
After the war, country music, and particularly western swing, became huge in Southern California and she became a sensation playing in all the famous LA clubs such as The Palomino Club. She hung out with Merle Travis, Les Paul, Leo Fender, and Paul Bigsby around the Los Angeles music scene in the early 1950’s.

When Las Vegas took off she started playing there as well.

In 1963 at the age of 45 she decided that she was too old for playing all the clubs and late hours, so she quit music and sold her steel guitar. She went to work as a telephone operator at the Desert Inn in Las Vegas, but she missed playing music so much that she became very depressed.

In 1977, not yet 60 years old, she decided that life without music wasn’t worth living, and she took her own life.

To those of us past 60 and playing as good as ever, and nowhere near gorgeous, this is an amazing story.
Posted by Jim Mathis at 2:30 PM No comments:

B.B. King is going to be in town next week. I have seen B.B. a number of times over the years, but I will never forget the first time.

It was 1976 and my wife and I were celebrating out fifth wedding anniversary. We had decided to fly to Reno for the weekend. It was the first time I had ever rented a car. We got a Chevrolet Monte Carlo and drove around Lake Tahoe. We checked the local paper and saw where B.B. King was playing at the lounge at the Holiday Inn. I remember Louise said, “Who is B.B. King?” and I said, “You’ll see.”

I had heard that you needed to tip the maître de in Reno or Vegas if you wanted a good seat. So I gave the hostess a five dollar bill. In 1976, that was enough to get a front row seat in a hotel lounge. She escorted us to a table for two by the stage where we were enthralled by B.B.’s music and showmanship for the next 2 or 3 hours. My wife has been a B.B. King fan ever since.

The next night we went to see Roger Miller at the Golden Nugget where Glen Campbell made a surprise visit and they did a few songs together.

It was an amazing weekend.

One of the cool things about getting older is all the memories of great places we’ve been and people we’ve met.

And we’ve only begun.
Posted by Jim Mathis at 7:56 AM No comments: