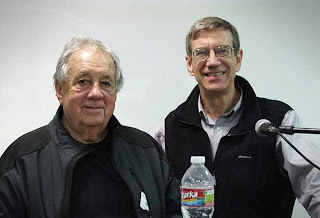 I just got back from a 500 mile road trip to meet one of my long-time heroes, Jim Halsey. Jim started booking bands at the Memorial Hall in his hometown while still in high school in 1949. This was the town where I was born, Independence, Kansas, and I am sure my parents went to many of the concerts he promoted.

One of the bands he booked was Hank Thompson. Hank asked the very young Jim Halsey to be his manager. Jim saw this as his chance to see the world, so he joined Hank and the band on the bus and booked them for 250 dates in 48 states the first year. Jim rode the bus and handled all the details of touring.

He noticed that many of the people buying tickets looked liked that could better use the money somewhere else, like for food or clothes, but when they left the show they were different. For a few hours Hank as his band had taken them someplace where they had not been before, or not been for a long time. Jim realized that taking people to a place of peace and happiness for a few hours was a viable product, well worth the money spent on the price of a ticket.

He soon figured out that if he had a number of people capable of taking people to this place, and applied sound marketing and business principles, a lot of money could be made. And that is exactly what he did.

Hank Thompson introduced him to Wanda Jackson, who introdced him to guitar player Roy Clark, and the Jim Halsey Company was off and running.

Jim told about discovering the Oak Ridge Boys and the Judds, and stories of booking the first country acts in Las Vegas and booking country performers into Carnegie Hall. Jim Halsey bands were the first to play in the Soviet Union which had a big role in ending the cold war.

He has a wall full of gold and platinum records representing over 250 million record sales from the people he has managed. His son, Sherman, now manages Tim McGraw.

Jim is now teaching music business and has a book out titled "Starmaker, How to Make Money in the Music Business." I can't wait to get started reading it. I sure wish I had had access to this kind of knowledge forty years ago when I was first trying to figure out my career. The surprising thing was that the room was not packed with young people anxious to learn how to make their mark. Starmaker360.com

Is the music too loud?

Just about everybody who plays music or has any responsibility for sound has heard complaints of being too loud. Actually there is a logical explanation for this.

As we age our eardrums become less compliant. They become stiff like about every other part of our body. The symptoms show up in several ways. The obvious one is that soft or high frequency sounds become hard to hear. We have trouble understanding children or we have the TV cranked up high, or we miss a lot in conversations. We can adjust to this loss to a large degree with a hearing aid that amplifies the frequencies that we don’t hear.

Another way this condition shows up is that complex sounds such as music, especially at higher sound levels, tend to distort. The older eardrum and its associated components can’t react fast enough to transmit a clear sound to the brain. We think that the music is just too loud when the real problem is our hearing. The obvious solution is earplugs to reduce the sound level.

If or when I develop this condition I intend to carry a set of earplugs with me when I go to a concert. This is no different than putting on reading glasses to see fine print or to read street signs.

The problems arise when we don’t recognize the problem as a physical one and insist that the sound man is used to rock concerts, people mumble too much, or the printers intentional make the print too small.

My generation needs to get used to reading glasses, hearing aids, and earplugs. Complaining, stop reading, or stop going to hear live music is not a good choice.
Posted by Jim Mathis at 8:27 AM 3 comments:

Almost eight years ago, some friends and I put together a Christian blues band called Sky Blue. Sky Blue has been one of the great joys and successes in my life. We have now played over 150 dates and expect to do many more. We just keep getting better all the time.

But my deep background is country. I’m just a country boy at heart. My dad was a country singer who would remind you a lot of Merle Haggard. My early influences were mainly Grand Ole Opry people from the fifties and sixties.

Recently I decided that rather than try to take Sky Blue in a more country direction, I needed to start another, totally new band that would play not only some of the songs I grew up with, but original music that would take advantage of the influences that are dear to me. They tell me I sound like Johnny Cash and I love Marty Stuart. Waylon Jennings opened my ears and I can’t remember a time without Bob Wills. Lynyrd Skynyrd and Marshall Tucker made a big impression on me as well.

I found some other guys who were sympathetic to the cause and “After Taxes” was born. We are going to have a band launch party on Friday, July 20 at the Oakshire Clubhouse at 95th & Nieman. This is just across the street east from the Oak Park Mall. The address is: 9555 Nieman Place, Overland Park, KS 66214. Food and drink will be provided and we will start playing around 8:00, so come around 7:30.

Please RSVP so we will have an idea of how much food to get. We will pass the hat to cover expenses.
Posted by Jim Mathis at 6:32 AM No comments: